Feel free to reach out!

As one of the top Facebook open-source ventures, React Native has proven its capabilities as an adaptable, versatile, and user-friendly platform for building web and mobile apps that have access to the well-known ReactJS library. It is being adapted to industry experts in the IT industry, to be one of the most effective JavaScript libraries due to the numerous ReactJS mobile and web applications it has developed.

Our skilled React Native developers have mastered the technology and are making use of its capabilities to create top-quality mobile and web apps. We have demonstrated our expertise across a range of industry areas, with companies ranging from small to huge as well as SMEs.

Finding the most skilled tech specialists isn’t easy. But, with TFT, it is possible to create sophisticated network applications with greater performance and a more flexible framework for existing projects.

It’s true that React Native experts don’t write code straight from the start. First, it’s important to comprehend the concept and the requirements. We study all the details that clients provide in order to formulate a comprehensive plan on how to proceed so as to achieve business goals and deadlines.

We are a group of skilled and focused designers who develop truly enjoyable products with a stunning user interface. At TFT, we make sure that each element of the design is beautiful, so as to offer an actual digital experience.

Mobile app technology is similar to fashion trends: some are old-fashioned and the others are trendy. React Native has been tested and proven, making it definitely worth converting to. Why not make use of this framework to upgrade an existing application and give it the native appearance and feel?

If you are looking to create MVP, React Native is the ideal choice. Why? Since the MVP is mostly about trying to test the unknowns. Instead of guessing what platforms users prefer, it’s best to accelerate the process of developing and simultaneously build apps for both Android and iOS applications.

When you publish the app, it doesn’t mean that the need for care and supervision isn’t there any longer. To ensure that all bugs are addressed (apps do not come with bug-free software) and that the app properly functions, we offer post-launch support as well as maintenance.

Template-based apps that offer no value This is definitely not what we intend to provide. Why? Because users don’t return to these products. Instead, we create highly customized cross-platform applications that address real pain points. The mature JS libraries assist us in achieving this. 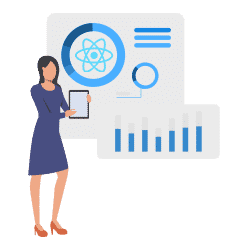 Reasons To Choose React Native For Your Business Projects

In the age of modern technology, React Native app development has created its own niche by offering the fastest speed, user interface and proficiency, all with an affordable approach. Some of the obvious benefits that have led to its popularity include:

How to Hire React Native Developers from TFT (Hiring Process)

What is React Native? What components do they include?

React Native is a combination of two major streams: JavaScript and Native ( or UI). Both communicate using bridges. This lets native functions be invoked through JS code on a particular platform.

What are the main advantages of the use of React Native over the native method?

The development of cross-platform applications has emerged as an ideal alternative to creation of only native mobile apps. It has the main advantage of reducing time and money. This is achieved through reuse of software and pre-built components.

Which product or company is a great choice with React Native?

A native app's coding typically results in higher costs, more time for release and, occasionally even inefficiency. React Native however allows for reducing development time and agility when creating an app in addition to speedy processing and a better user experience. It is therefore regarded to be one of the best alternatives for developers who wish to share the same code base for an online site and a mobile application for iOS as well as Android.

What are the apps built with React Native?

In discussing Facebook as a React Native creator, it isn't surprising to note that the largest social network has React Native components in its own products. The Ads Manager app is the first app developed by the company that is written using React Native. Beyond that, technology and business giants like Instagram (which is owned by Facebook also), Pinterest, Bloomberg, Uber Eats, Walmart, Tesla, Wix, and many more have adopted this framework to a different or less extent in the design of their apps.

So Let us Connect and Transform your idea Into an awesome Solution. Go ahead and fill the form below

We are always looking for innovation and new partnerships. Whether you would want to hear from us about our services, partnership collaborations, leave your information below, we would be really happy to help you.